There's a new label in town and it's been making lots of noise of recent. The team at Dinked records aren't new to this. They have been around the block and back a few times, and have had lots of experience in putting out records with previous projects - and the expertise definitely shows with this series of fantastic releases. It's worth mentioning that these are all legitimate reissues fully licensed through their respective publishers. Some of these have never had a previous releases on 45 - And for those tracks that have had a 45 release, you would definitely be hard pressed to turn up an original 45 in the field - So for most collectors these beautifully executed releases should suffice.

What we have here is a series of six releases. The first half comprise of some heavyweight soul funk anthems, and the later half give us three classic hip hop tunes. let's look at them in more detail: 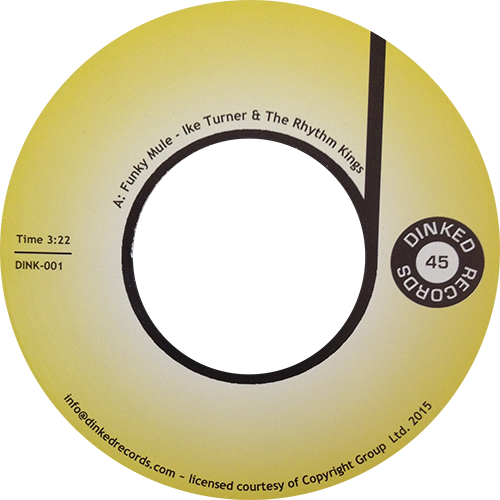 DINK-001 sets up the label nicely by giving us the uptempo funk standard "Funky Mule" from Ike Turner, originally released on the album of the same name back in 1975. To my knowledge this track never had an official 45 release but over the years became a funk standard for it's hard hitting drums.

On the flip side we get an edit by Canadian producer Nick Bike, who takes the drums and extends them into a full length drum-a-pella that is just begging to be used as a deejay tool. 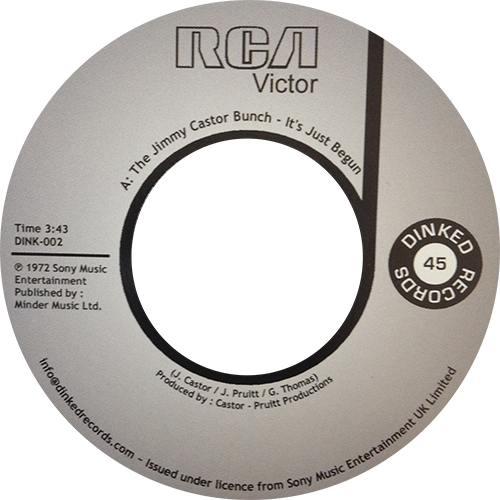 The second release takes one one of the all time greatest B Boy anthems of all time and pairs it with another equally important funk tune - Both from Jimmy Castor. "It's Just Begun" is the definitive break dance anthem, and this track alone makes the purchase of this record a must have. Whilst it has seen a release on 45 in it's original pressing back in 1970. It's pretty hard to come by. Infact I can't even speak with authority that the original pressing has the full extended drum break - But guess what - This one on Dinked records does, making double copies of this release totally essential.

The third release on the label nicely connects with the previous release. "Soul Travelin'" by Gary Byrd was infact recorded using the Jimmy Castor Bunch backing band. Hip Hop heads should all recognise the Horns at the top as used by Poor Righteous Teachers. This release stays faithfull to the 1973 original 45, containing parts 1 and 2. However, It's worth noting that the original 45 will set you back for a pretty sum of money - making the purchase of this newly re-issued version on Dinked a no-brainer. 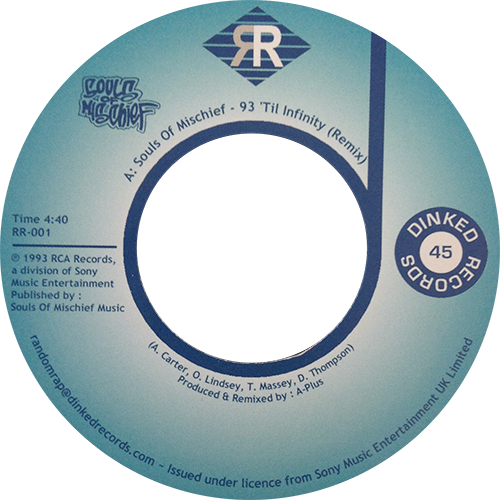 The next release in the series is a curious one. The label now takes a u-turn and introduces us to a series of 45s under the sub label name of Random Rap. Its first release is the very classic "93 'Til Infinity" by Soul Of Mischief. I must say it was quite a surprise to find that it wasn't the iconic album version, but instead a remix from Souls Of Mischief member A-Plus. I can't really speak on why this decision was made (I simply don't know), but I'm going to hazard a guess by saying it might possibly have something to do with the original album version being so reliant on the Billy Cobham sample from "Heather", In any case, the A-Plus version we get here is pretty cool in its own right - and very different, breathing some new soul into a timeless classic. 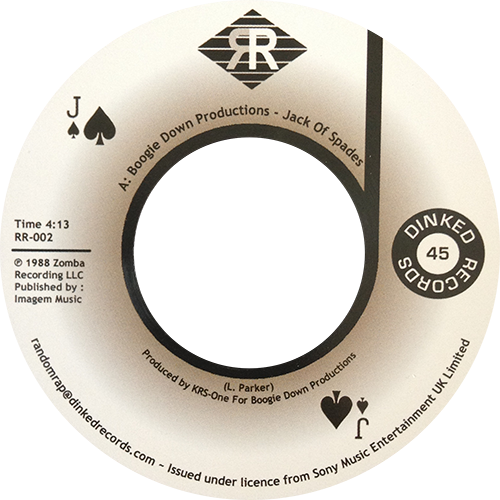 "Jack Of Spades" from Boogie Down Productions did infact have a not so official 45 release a couple of years back, but were snapped up pretty quickly - So this fully licensed release is definately a welcome addition to the crates. It's an absolute classic that will no doubt enjoy a new rotation by many deejays. Plus the B Side gives us a much appreciated instrumental using the funky-dub dancefloor "Greedy G" sample. 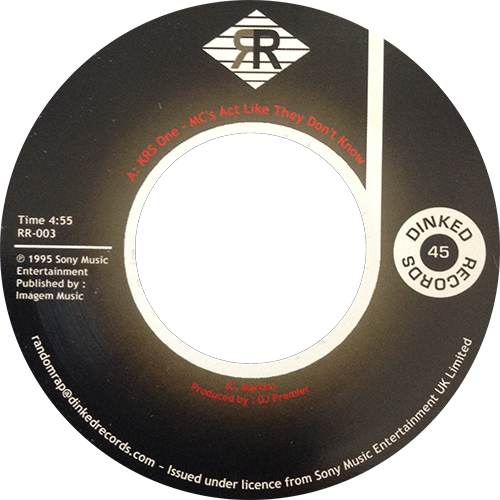 Lastly, another KRS-One classic in the form of the DJ Premier produced "MC's Act Like They Don't Know". What's to say about this one apart from it being an instant must have that has never been available as a 45 before. Plus we get the instrumental on the flip. It's a nice way to round up this 6 part series on dinked recordings. But I hope the label doesn't stop here, and continues to provide more classic material in the future.